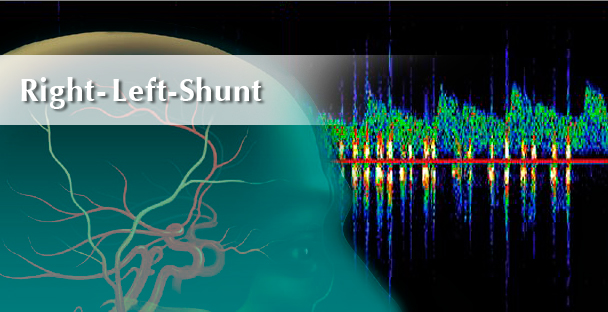 Heart failures like atrial septal defects (ASD) as well as ventricular septal defects (VSD) can be detected by TCD measurement.The most common and well known septal defect is a Patent Foramen Ovale (PFO) causing Right to Left Shunt (RLS). RLS are direct connections between right (pulmonary) and left (systemic) circulation. By this connection blood can cross to the other circulation without passing pulmonary capillaries.
PFO persists in approximately 25% of European population. In a sense, PFO is less considered as a defect but rather than a normal variation. The PFO is a bypass, which is necessary for fetal circulation. In patients suffering from PFO this bypass is not entirely occluded.
VSDs are the most common heart failure (3/1000 – male:female 1:1), which is often prominent and diagnosed very early. ASDs account for about 8% of heart failures, which often remain unnoticed. In adults they account for approximately 1/3 of all heart failures.

Scattered emboli, which have its source from systemic circulation (e.g. embolic deep vein thrombosis), usually get stuck inside the pulmonary vessels. Depending on their size, this can be asymptomatic (autogenic emboli-lysis) or results in case of bigger emboli in sudden pulmonary embolism.

Providing a RLS, there is a danger that emboli cross directly into systemic circulation and result in organ infarction (paradox embolic event (PEE)). Cerebral stroke is the most feared PEE since cerebral ischemia is irreversible.
Truncus brachiocephalicus (with major braches: left A. subclavia and left carotid artery) as well as right A. subclavia and carotid artery are (despite coronary arteries) the first three branches of the aortic arch. The carotid arteries and vertebral arteries, which arise from both subclavian arteries, are the only brain feeding vessels. Depending on anatomy and little regenerative capability of brain tissue, these vessels are especially vulnerable to embolism. 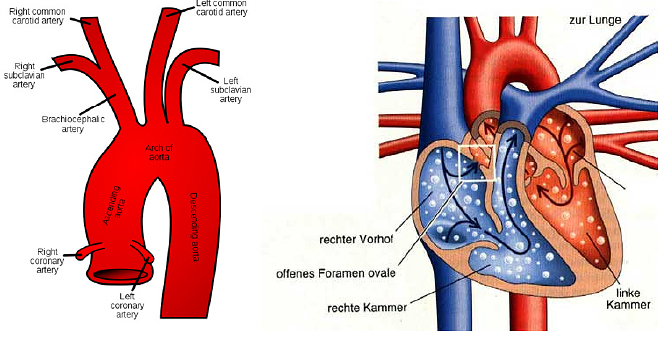 Providing existing RLS, many other sources of emboli account as origin. Despite previously mentioned deep vein thrombosis also scattered tissue particles during surgery are possible. More frequently, reason for embolism are gasous bubbles, which reach the systemic circulation due to vacuum during surgery in sitting position (e.g. shoulder surgery or neurosurgery).

Particularly relevant become RLS for divers. Solved nitrogen may bubble up during surfacing. Usually these bubbles get stuck inside pulmonary arteries is exhaled immediately. In case of RLS these bubbles can cross to systemic circulation and may reach brain-feeding vessels, which can result in stroke depending on the amount bubbles.

To perform TCD examinations an ultrasound contrast medium is necessary, which cannot pass pulmonary capillaries.
On the one hand a commercially available contrast medium can be use (e.g. Echovist©) on the other hand some authors recommend (because of relatively high costs) to use an agitated mix of 6-7 ml saline, 1-2 ml patient blood and 0.2 ml air. This mix should be agitated until a dense foam without macroscopic bubbles has been generated.
Cave: Pharmaceutical laws, FDA, etc. Depending on the country, at least informed consent is necessary. 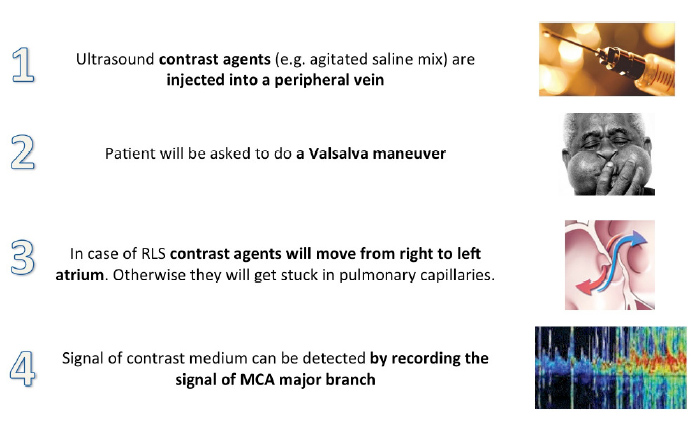 While the patient keeps mouth and nose closed, he is advised take a deep breath and afterwards to exhale forcefully. This results in increased pressure inside the airways, which in turn increases pressure inside pulmonary circulation and thereby causes a pressure reversal across the shunt.