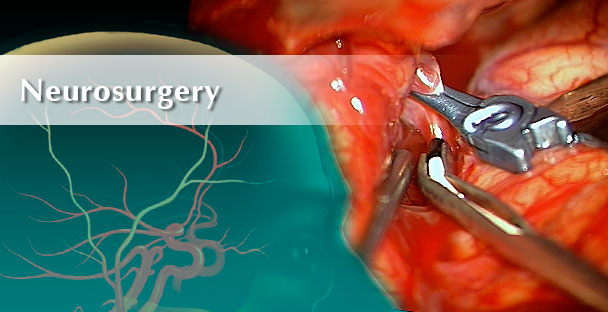 10 Feb 2022 The use of Microdoppler in Neurosurgery

Posted at 15:00h in Neurosurgery by Compumedics Germany GmbH 0 Comments

Microdoppler for the protection of feeding and draining vessels in Neurosurgery

Generally, Doppler-ultrasound offers the application in nearly every operative context of surgery since this method offers the ability to detect even smallest vessels and protect them from iatrogenic damage (e.g. endoscopic partial nephrectomy). Microdoppler techniques keep their special value in the subject of neurosurgery. Due to irreversible damage of neuronal tissue in case of ischaemic hypoperfusion during spinal or brain surgery it is highly important to protect feeding and draining vessels.

The term of „Microdoppler“ describes the intraoperative application of high-frequency ultrasound (>12 MHz) in the near neighbourhood of in-vivo vessels to derive its flow patterns.

Major applications are surgical therapy of intracerebral aneurysms, arterio-venous malformations as well as angiomas and tumors at the base of the skull. Due to the near neighbourhood of pituitary gland and internal carotid artery, sometimes application of Microdoppler becomes necessary to prepare the artery safely during resection of tumour tissue. Scientific literature contains some intriguing approaches to use Microdoppler even for burr-hole biopsies to detect vessels in the course of the biopsy channel. Thus the risk of iatrogenic haemorrhage could be minimized (e.g. Hertel et al., 2005).

The most important advantage in Microdoppler techniques is its entirely non-invasive application. Neither the use of iodine contrast agents nor mircobubble contrast fluids, which account for the risk of allergic reactions, becomes necessary. Not at least this fact seems to be a major reason that complications, which are associated with the use of Microdoppler, are rare.

The procedure of a Microdoppler examination is quite simple: The sterile probe is placed to the surface of brain tissue and signals will be derived in the initialized depth. A common application is “tissue scanning” for vascularisation (e.g. in tumour tissue) to protect vessels, which feed and drain healthy or even eloquent brain regions. 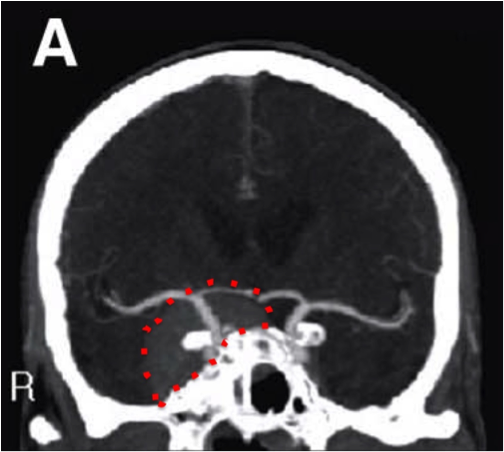 Figure shows a tumour located at the base of scull (red line) which is crossed by internal carotid artery (ICA). Within the lesion ICA branches into MCA and ACA. These vessels had to be prevented from surgical damage.

Surgeons benefit from that possibility to estimate the depth of vessels, which already may have been infiltrated by tumour tissue. A frequent neurosurgical application of Microdoppler is the surgical treatment of intracerebral aneurysms. Generally aneurysms are treated by metal clips, that are placed onto the aneurysms sack. Sometimes accidental mispositioning causes intravascular stenosis or which occlusion provokes hypoperfusion or stroke. In the past, only postoperative procedures like Digital Substraction Angiography (DSA) could detect those lesions. By placing the Doppler probe onto supplying and draining vessels and following easy analysis of blood flow velocities (BFV) potential stenosis can be detected, which may lead to the decision of replacing the clip. 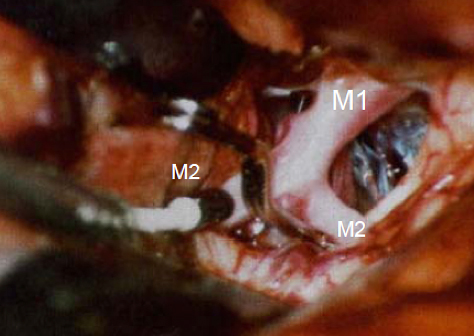 After clip placement, although there was no visual indication of vessel stenosis, insonation of the branch artery revealed a reduced flow velocity of 5 cm/second.

The aneurysm clip was repositioned however, the flow velocity (10 cm/s), the spectral waveform, and the audio signal did not return to baseline.

Additional to 16 MHz Microdoppler there are other methods like DSA or ICG videoangiography. Both DSA and ICG-VA are less competitive than complementary to Microdoppler. Intraoperative DSA offers high-resolution vascular imaging of all brain-feeding arteries but is limited to specialized medical centers, needs X-ray exposure and is expensive whereas Microdoppler is easy to apply and cheap. ICG-VA is able to visualize vessels in a qualitative manner (shows the vascular structure) but is unable to detect those vessels, which are located beyond the tissue surface. Studies, that compare the methods intraoperative quality of results, are (not yet) available.