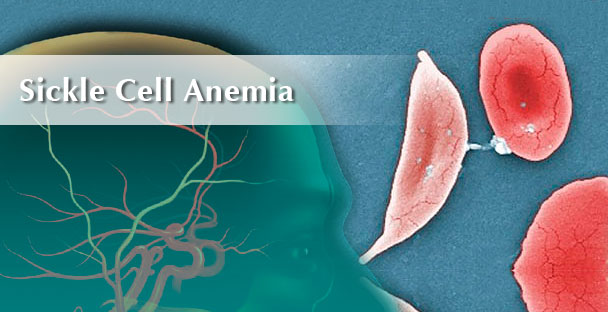 TCD in use with Sickle Cell Disease

Transcranial Doppler has its importance in diagnosis, treatment decisionmaking, and prognosis of Sickle Cell Disease (SCD). By TCD measurements of elevated blood flow velocities (BFV), children, who may benefit from blood transfusions, can be identified even months before stroke. TCD guided, intensified therapy reduces stroke risk.

Sickle Cell Disease (SCD) belongs to the subgroup of haemolytic anemia (see below) and is the most common haemoglobinopathy: About 20-40% of population in tropic Africa and about 5-10% of the black population in America are heterozygote carriers of mutant chromosome 11 (only one of both chromosomes carries the mutation, which causes an abnormal ß-chain of haemoglobin). Incidence is about 400/100,000 people in Central-Africa. Presumably, this mutation could have been established evolutionary because of its increased resistance against Malaria. In Western Europe this disease is primarily important among immigrants. Mutation, which, as previously mentioned, is located on chromosome 11, causes production of HbS. “S” stands for “sickle”. 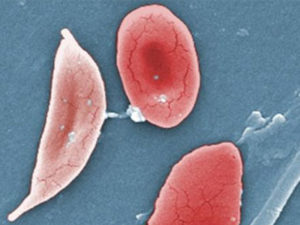 The deoxygenated HbS (e.g. physical stress, sport, low air pressure in high altitudes) precipitates, which causes deformation of the erythrocytes. They assume a sickle-like shape (see figure above), lose their deformability and occlude smallest arteries, which can result in organ infarction: e.g. renal, splenic, mesenterial and cerebral infarction. From those, especially cerebral infarction (=stroke) is a feared complication. Most common are splenic infarctions, which influence its function negatively (functional asplenia) and cause frequent infections.

Heterozygote carriers are often asymptomatic. However, homozygotes develop haemolytic episodes even in the early infant age, which requires early treatment.

Transplantation is the only available causal therapy. Symptomatic therapy includes avoidance of oxygen deficiency. Transfusion of blood products (erythrocyte concentrates) is made only after strict diagnostic evaluation but can influence patient´s outcome significantly. Today, in the US and Western Europe about 85-90% of suffering children achieve the age of an adult.

Available studies (especially STOP I + II trials, Adams et al.) suggest that using TCD measurements children, who may benefit from blood transfusions, can be identified even months before stroke. This relies on the fact that agglomerations of polymerized HbS cause intracerebral arterial stenosis, which can be detected by measurement of elevated blood flow velocities (BFV).

STOP I + II showed that increased risk of stroke was significantly associated with increased BFV >200 cm/s. 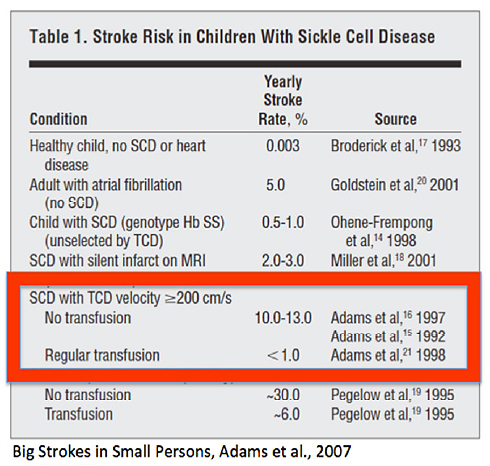 Screening of the young patients should be started at age of 24 months (Adams et al. 2005) and should be repeated at least once or twice a year up to the age of 10 years (low risk patients) or 18 years (high risk patients) (Mazumdar et al., 2007)

The study of Bernaudin et al. (2011) showed that a TCD guided, intensified therapy reduced stroke risk from 11% to 1.9% per anno.