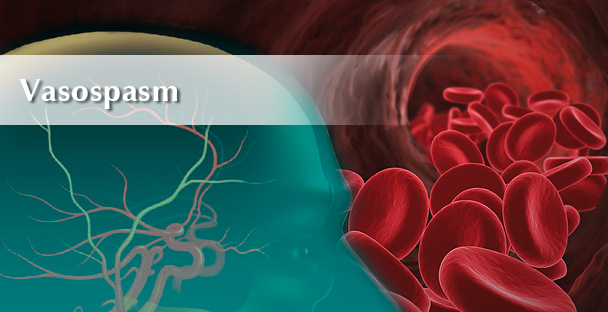 Regular measurement of blood flow velocities (BFV) using ultrasound allows to draw conclusions on vascular luminal changes, which is inversely proportional to the BFV and can be frequently repeated bedside since it does not require invasive techniques.

Despite re-bleeding, Vasospasms are a major complication following subarachnoid haemorrhage (SAH). Incidence of SAH in Germany is approximately 15/100,000 in general population. That equates to 13,000 to 14,000 new bleeding events each year.
In about 2/3 of patients vasospasms of intracranial arteries are detectable. Approximately 1/3 of them suffer from Vasospasm caused symptoms, of which in turn 1/3 will die (Dorsch und King, 1994+2011).
The risk to develop Vasospasms achieves its maximum between second and tenth day after the event of bleeding. Up to now, the reason, which accounts for the development of Vasospasms has not been clarified definitely.

Vasospasms are luminal vessel narrows, which can cause hypoperfusion of brain parenchyma, which is supplied by the spastic vessel. In case of significant spasm this bears comparison with ischemic stroke.
As for all types of stroke symptoms can be different (e.g. aphasia, hemiplegia, etc.). However, clinical assessment of patients is often complicated due to sedation and mechanical ventilation.

Firstly, diagnosis of subarachnoid haemorrhage itself is usually made by CT scanning (blood located within cerebrospinal fluid spaces (= subarachnoid space). Typical clinical symptoms are never experienced “sharp-shooting” headache and meningism (inability to drop chin to sternum) Definite and certain diagnosis of vasospasm is usually made by Digital Substraction Angiography (DSA) of intracranial arteries, which is considered as gold standard. Even though, CT angiography can give evidence of vasospasm but uses invasive X-ray as well.

Regular measurement of blood flow velocities (BFV) using ultrasound allows to draw conclusions on vascular luminal changes, which is inversely proportional to the BFV and can be frequently repeated bedside since it does not require invasive techniques.

However, knowledge of initial BFV measurements is required, which should optimally be determined immediately after admission.

TCD for detection of Vasospasm

To detect Vasospasms reliably, TCD examinations should been made at least daily within first 10 days after event of bleeding (initially preferably twice a day). Often, absolute BFV are determined to indicate Vasospasms. Calculation of the Lindegaard-ratio, which is calculated from BFV in medial cerebral artery and ipsilateral internal carotid artery, (vMCA/vICA) seems to be more suitable.

As far as no other stenosis exist, for MCA following value are useful to detect Vasospasms:

Both, for PCA and ACA similarly the same values can be applied, but should be classified about 25% lower than for MCA. However, in these segments even in case of normal blood flow velocities spasms are possible. Provided a good collateralisation by ACOM and PCOM, these spasms will not become haemodynamical relevant, which can even result in decrease of BFV in these segments.
In case of aplasia or hypoplasia of ACOM and/or PCOM (which might be initially know), increased BFV indicate relevant Vasospasm as for MCA.

Despite TCD blood flow velocities can be derived using transcranial color-coded Doppler ultrasound (TCCD). This technique provides two-dimensional imaging of intracranial vessels as well as an anglecorrected flow measurement. However TCCD underlies a higher rate of inadequate acoustic (ultrasonic) bone windows (10-20% for TCCD vs. 5-10% for TCD referenced by literature).

Recently, NIRS (near infra-red spectroscopy) was investigated for detection of intracerebral vasospasms. NIRS provides measurement of intra-parenchymal oxygen saturation. In contrast to TCD and TCCD, NIRS detects spasms not before they become haemodynamically relevant, which complicates early diagnosis.

Due to relevant cardio-pulmonary complications Triple H has become discussed controversial and is currently often applied only in a “modified” manner.
Nowadays, in neuro-vascular centres vasospasms are more frequently treated by angioplasty, which is (up to now?) limited to the major branches of anterior circulation (MCA, ICA, ACA) since posterior circulation is not accessible by catheter techniques by now.
Another treatment option, which is under research, is the intra-arterial injection of Calcium-blockers into the spastic segment (also using catheter techniques).